Readers will be familiar with the regular business whereby moth-trapping is undertaken in Marks Hill Wood on a regular four-weekly basis, subject to weather and season.  This has been going on since 2009, and it has yielded an astonishing amount of information and insight into the wildlife of what is a fascinating woodland.

Thus, as of the time of writing, we have recorded no fewer than 388 species of moth (to add to the 28 species of butterfly) encountered in the wood.  Vitally, the information gathered tells us much more about the reserve’s ecology, and that in turn influences some of the management.

We have come to appreciate the flight periods of the various indigenous species, and have a good idea of what to expect at a given time of year.  We have also had a lot of fun, and rather a lot of the beverages and biscuits, laid on initially by Ron Delemos and subsequently by Fred Burgess.

In 2009 we rejoiced in the song of a nightingale (sadly, not repeated in subsequent years), and we have been attended regularly by the tawny owls and foxes, as well as the pipistrelles which turn up for their cut of the action.  In June and July there comes a modest addition to the night-time illumination from the glow-worms.

We have also made some valuable discoveries of other creatures.  Remember that large brown lacewing Drepanepterix phalaenoides?  It dropped in one evening in April 2013 and astounded us with its size and strangeness.  That turned out to be a very rare insect, not given to migration but instead associated with ancient woodland, where by its very nature it escapes normal observation.  That was the first time it had ever been recorded in Essex, and the number of other records for various wooded counties like Sussex is correspondingly low.

April 2015 was determined not to be outdone.  Twelve of us gathered in said wood on 21st April and proceeded to record sixteen moth species, in varying numbers.  Ten Frosted Green moths constituted a particularly delightful haul, sufficient to send us home chilled but appreciative.  However, we also encountered another UFO, this time in the form of a very attractive but totally unfamiliar fly-like item which did not correspond to the normal range of such insects. 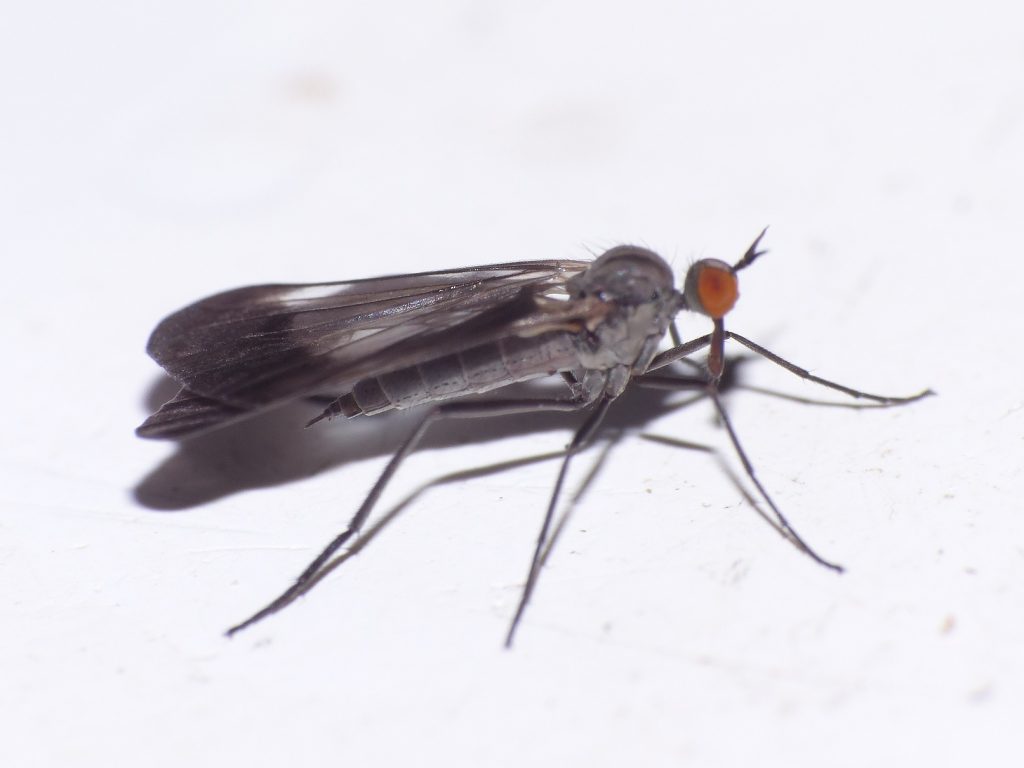 Peter Furze took some excellent digital photos of this solitary captive, and these were sent to appropriate entomologists for comment and identification, not least Del Smith, the county recorder of Diptera.  Such is the wonder of modern communications that within twenty-four hours we were learning from the Scottish-based Del that this was none other than Rhamphomyia marginata – a species so rare that he had never seen it, in all his years of expert study. 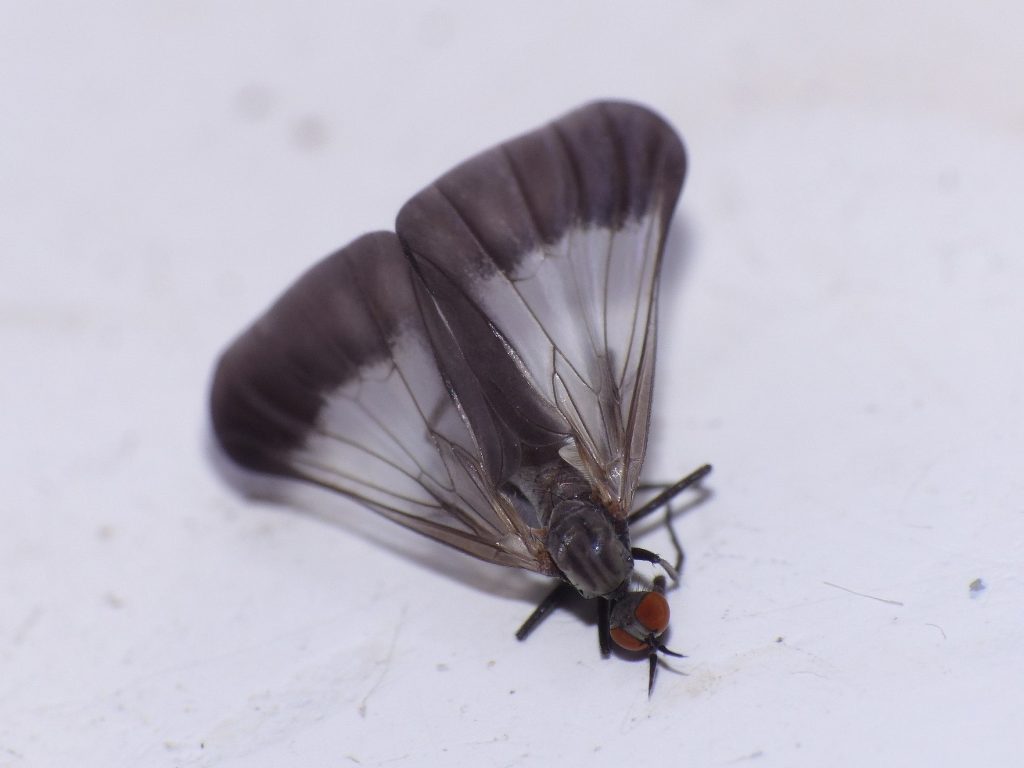 We now know rather more about our new insect.  It, of course, is not new – the novelty lies in our at last encountering it.  It is possible that this creature has inhabited our woodland for some while, although a recent expansion of range from Kent or elsewhere cannot be ruled out. Hitherto, virtually all records came from various woodlands in East Kent, the first English record having been made in 1973.  What is not known, of course, is how long the species had been resident in the wood where it was discovered.

The creature in question is indeed a fly – an empid fly: one of the Empididae.  These are flies equipped with biting parts, enabling them to prey upon midges and other small flies.  The female of this particular species has considerably enlarged and somewhat colourful wings, and it appears that this feature is designed to attract the males, which are much less conspicuous.  Significantly, it was a female that was captured in Marks Hill Wood on 21st April, attracted to light.

We have learned more from the available literature, some of which emanates from Continental authors, for the insect is much more widespread there.  The females are given to swarming, particularly in the time before dusk (and perhaps later), and the object of this behaviour seems to be part of the mating ritual, each insect seeking to attract a mate.  The males, it seems, also swarm, separately, prior to engaging with the female swarm.

We are grateful to Del Smith, Peter Harvey and Roger Payne for their ready assistance in getting the strange insect identified.

We are also reminded that we know and understand so little, even about a woodland like Marks Hill where considerable effort has gone in to observing its wildlife, ever since the nature reserve was set up in 1974-5.