Basildon Natural History Society’s emblem is based on the leaf of the Wild Service Tree (Sorbus torminalis) and has been adopted to illustrate the close ties the Society has with the areas of ancient woodland within the Basildon area. One of the best sites in Basildon for this nationally rare species is within Marks Hill Nature Reserve; here they thrive on the heavy clay soil that underlies areas of ancient and secondary woodland. Within this 45 acre site are pockets of oak, ash and hornbeam woodland interspersed with overgrown gardens, some dating back to the time of the plotland settlement during the early 1900’s.

Many of the Wild Service Trees in Marks Hill grow along the nature trails that were once the unmade roads that gave residents access to their plotland homes. The picture below shows a Wild Service Tree alongside a disused telegraph pole in Gladstone Road. 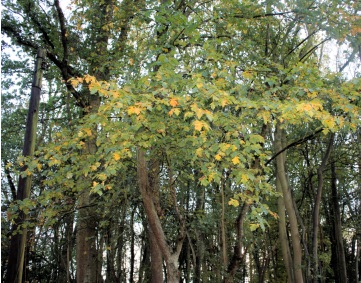 In autumn, the leaves of the tree change colour before they fall, their colour ranging from green to yellow, orange and red. All the leaves shown in the picture below were collected from beneath a single tree. 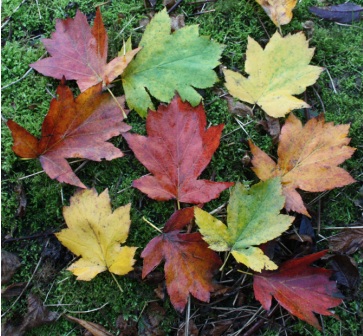 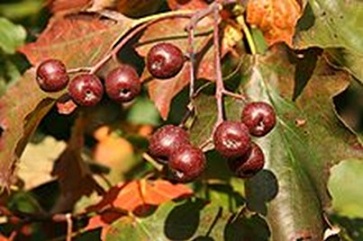 The fruit of the Wild Service Tree are called ‘chequers’ and are edible when left to reach a state of partial decay, a process known as ‘bletting’. However, it is reported that the seeds themselves contain traces of cyanide so should not be consumed.

There is evidence that chequers were once used as a remedy for digestive ailments. The Latin name ‘torminalis’ means ‘good for colic’.

Chequers were used to flavour beer before the use of hops and it is thought that pubs and inns bearing the name Chequers or Checkers may have derived their name from the chequered pattern on the fruit or bark of Wild Service Trees. Of course there are equally valid claims that the name is rooted in heraldry or from the fact that inns in ancient Rome displayed a chequered sign to indicate that they provided banking facilities. We will never know for certain but it is nice to think that in days of old, beer flavoured with chequers from trees growing in our ancient woodland was served at an inn somewhere in our district.

Sadly, the strongest brew that you will be offered in Marks Hill Reserve today is a cup of tea or coffee during the work party mid-morning break.